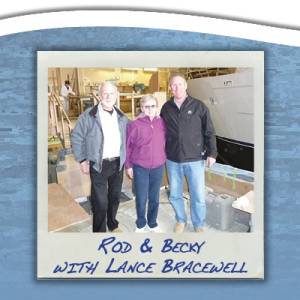 Rod and Becky Nowlin are pictured with Lance Bracewell aboard their new Bracewell 41 trawler, under construction at the Bracewell Boatworks yard in Richmond, BC.

Their blue-hulled Bracewell 41 is progressing quickly toward a June completion. Rod and Becky have specified several custom features on their boat, including a commercial-duty Isuzu 7.2 liter 344 hp engine, custom refrigeration and freezer systems with engineroom-mounted compressors, several galley modifications, and a custom entertainment center with a drop-down GIGANTIC wide-screen LCD TV.

Rod and Becky selected the Bracewell 41 after extensively interviewing Lance, and following careful examination of the construction of a prior Bracewell 41. In 15 years cruising the world in their steel-hulled sailboat they’ve acquired a deep knowledge of what works and what doesn’t, and made their decision accordingly. Rod is retired US Navy, and they both are well-known in cruising circles (google “Rod Nowlin”...) for having successfully defended themselves against a pirate attack in the Gulf of Aden in 2005. Their world-cruising came to an abrupt end before dawn one morning in 2009 when their sailboat was struck by a Baltic Sea ferry operating without a proper watch — another remarkable story. They have even more tales of extreme situations and adventures at sea!

Rod and Becky are Alaska residents, intend to live aboard their Bracewell 41, and will focus their cruising on the waters of Alaska, British Columbia, and Washington.